Lübeck, 17 February 2020 – In 2019, the Possehl Group achieved record sales, despite the fact that the global economy cooled down noticeably. Based on preliminary figures, sales generated by the Lübeck-based conglomerate rose by 10 % last year to 4.1 billion euros, with considerably increased precious metal prices over the course of the year being the main growth driver. On a comparable basis, growth still amounted to over 4 %. This was primarily due to company acquisitions and the strong development of Possehl’s Cleaning and Tire Technology as well as Printing Machines divisions. “Both the weakening economy and the downturn in the automotive industry have certainly left their mark on some of our divisions”, says Dr Joachim Brenk, Chairman of the Executive Board at L. Possehl & Co. mbH. “However, Possehl’s broad-based lineup comprising nine different divisions has a stabalising effect on the Group’s overall performance and enables us to expand existing segments and develop new business opportunities.” Last year alone, Possehl invested some 150 million euros in tangible and intangible assets, more than ever before. “Through these investments, we safeguard Possehl’s long-term competitiveness and future viability, and create the basis for further profitable growth”, explains Brenk. 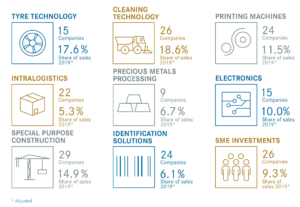 In the financial year 2019, consolidated earnings before interest and taxes (EBIT) amounted to 173 million euros. The EBIT margin, adjusted for precious metal effects, equalled almost 7 % of the Group’s turnover. Positive development was recorded in the Printing Machine business. Already in the first full financial year following the merger, the joint venture manrolandGoss was able to improve both its market position and competitiveness significantly, and returned to profitability. Another positive highlight was the development in the Cleaning Technology division. Hako once again achieved a significant increase in sales while the company’s earnings margin remained on the same high level year-on-year, whereas the negative impact resulting from the weak demand for automobiles and semiconductors was felt in the Electronics segment.

With five successfully completed company acquisitions in 2019, Possehl extended both its market shares and product portfolio in the divisions Special Purpose Construction, Intralogistics and Identification Solutions. A significant percentage of the currently more than 200 companies belonging to Possehl worldwide joined the Group over the past five years.

“2020 will be a challenging year for many companies and also for Possehl. However, we cannot see any reason for pronounced pessimism”, outlines Brenk. “We aim at continuing to grow stronger than the market in industries and markets important to us.” The extent to which individual companies will succeed in implementing digital technologies is certainly a key factor in this aspect. In addition to the efforts undertaken by the Group companies, Possehl hosts annual Digital Conferences with more than 100 participants from all divisions. Moreover, the Group Holding has expanded its expertise in the field of technologies and processes in order to support the Possehl companies with their transformation processes in the best possible way. “We regard digital change as an opportunity and a challenge at the same time, which we accept with a great deal of motivation and commitment”, explains the Possehl Boss.

For the year 2020, given a prospectively ongoing economic weakness, Possehl expects business to be stable, with positive and negative developments in individual divisions offsetting each other.

The Possehl Group, operating worldwide under the leadership of Management-Holding L. Possehl & Co. mbH, is a diversified corporate group currently comprising nine decentrally organised divisions that are economically independent of each other. In addition to L. Possehl & Co. mbH, the Possehl Group comprises over 200 subsidiaries in more than 30 different countries. In the financial year 2019, the Group generated preliminary sales of 4.1 billion euros. Possehl currently employs more than 13,300 people worldwide.

The company was founded in 1847 by Ludwig Possehl as a local hardware store in Lübeck. Since 1919, the non-profit Possehl Foundation has been the sole shareholder. This corporate structure enables the Possehl Group to operate independently and provides the basis for long-term entrepreneurial decisions.